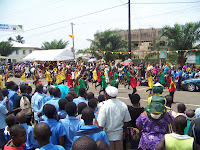 A Ballet class in Cameroonian colors 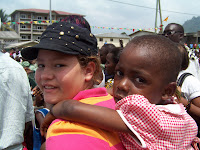 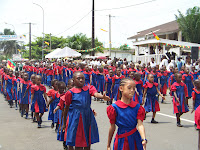 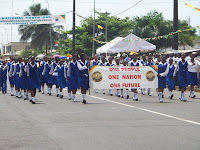 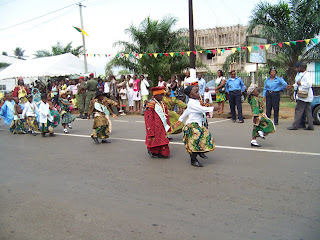 This week is Cameroon Youth Week. On Friday all of the schools participated in a parade and competed for the best marching school. Throughout the previous days we heard bands playing all over the city and could see other schools marching around their own fields. Our school children practiced their marching all week long, from the primary to the high schoolers. The little ones were so cute and sincere in their efforts. They definitely stole the show.
As the parade started they had little children dressed in different African garb to demonstrate the different cultures that are represented in Cameroon. They had one float in the parade showing the different industries of Cameroon. As the schools began to march they had all the preschoolers from all the school march first and their moms could pick them up as they passed by them on the street. We had a few march right out of their shoes and the teachers would grab the discarded shoes as they went by or one time this happened the child stopped to fix his shoe and all the children walking behind him that weren't looking piled into him causing a temporary traffic jam. There were also a few trips, falls, and tears but for the most part everyone enjoyed themselves and did good.
The high schoolers finished off the parade 3 hours later broken up only by little ballet teams or football teams walking before their schools.
It was a great day to soak in some of the culture here and be able to celebrate with them. We finished up the day with ice cream and a four mile that included 2 big hills that I prefer to think of as mountains :) especially in 90 degree weather. We arrived back at the mission hot, exhausted, and happy. We are so blessed and happy to be apart of these children's and teen's lives. 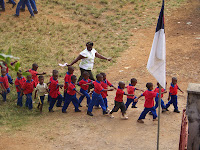 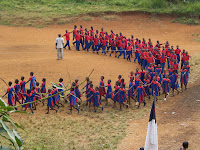 So cool!! Love reading about all of the new things you all are able to participate in.