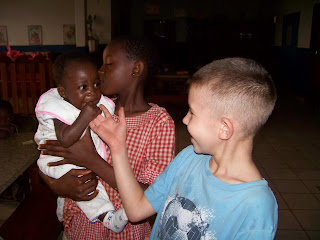 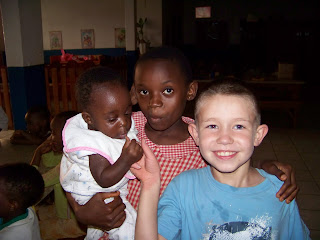 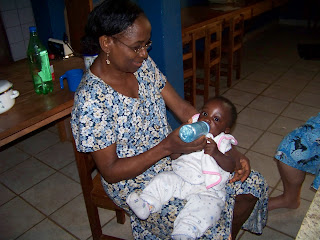 A couple of weeks ago we heard about a little 4 month old baby who was needing a home. Everyone scurried around to clean and prepare but the social services didn't come. Upon inquiry we were informed that the baby had been thrown away in the bushes and later found by a lady passing by. The police were investigating and trying to find out who the mother was and who had thrown the baby away before putting it in a home, so in the mean time the social services were taking care of him. If the police do find the responsible person they can be put in jail.
On Thursday, March 10th Mrs. Chamberlin and Bro. Peter took a taxi to the social service office and met the worker and baby for the first time. The baby had not been named yet so they were given the privilege of naming him. After several suggestions of long Biblical names Mrs. Chamberlin suggested Jerry, for Jeremiah, they all liked that and Jerry had a name. After some medical attention he arrived home, here at the orphanage, and was warmly greeted by Auntie Agnes and over 23 children.
Kent hasn't really gotten too involved in the orphanage but when he heard there was a baby boy he ran down as quickly as he could and introduced himself to little Jerry. He was feeling that three little toddling girls was enough and it was about time we got to have a baby boy. Jerry preferred to suck on Kent's fingers rather than shake hands but Kent didn't mind being drooled on at all.
As things stand for little Jerry right now we are being called a temporary placement because the lady that found him would love to adopt him. She will need to go through background checks and paperwork before that would be possible, but it is a possibility. We are loving having the little guy around, but if it is the Lord's will that he find a good home that is ok too. We are thanking God again for the privilege of being available for the homeless and cast aways. God is so Good.
Posted by Who are we at 11:33 PM

Baby Jerry is a doll...enjoy your time with him :)

What a sad story, but hopeful. Glad kent is there to take care of him.:)