Taking one for the Team 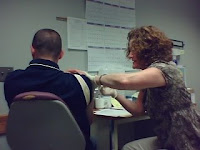 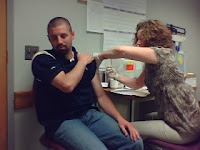 Drew and I got our shots out of the way. Drew only had to have 3 because of the shots he received in the army but he was quick to volunteer me for a fourth shot that the nurse said was recommended but not required (so sweet of him). I will say that the experience was very pleasantly quick and painless. She was a great nurse. She was pitching spent needles in the bin before I thought she had even given me a shot. All the while she talked about when she went to Africa. She warned us that they would steal our hearts. We already know what that is like :) Drew hadn't had anything to eat so she made him suck down a little juice box before he received his. I missed that picture but was able to capture these lovely poses. Kent was along and enjoying being the one to watch instead of receiving for once.

Today(the day after) all four of the team are comparing sore arms. The shots weren't bad but the day after is a bit surprising. We all feel like our arms have been on the receiving end of a batting contest. Small price to pay. Eyes on the prize!
Posted by Who are we at 7:19 PM