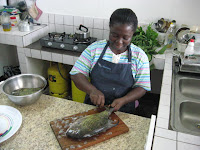 Drew sharing the message with Liberman 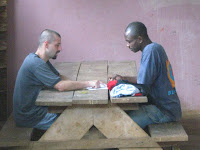 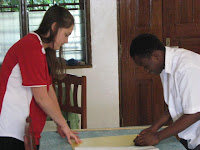 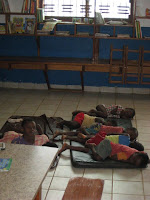 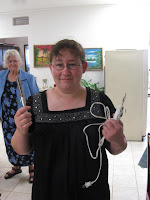 What used to be Dana's curling iron.

Today Mr. Drew(as they call him here) worked with a man that works here named Liberman on fixing up one of the classrooms. Later Drew sat down and shared the Basic message of the Bible(that Eric Himelick showed us at our revival). Liberman's eyes lit up and he thanked Drew for sharing it with him and said he had been waiting to find some way he could witness to others. What a great feeling to be able to bring a needed message. They are the same age and both have two children so they are finding a lot in common. Drew is invited to share the basic message of the Bible with Liberman's soccer team. He is excited about the way the Lord is opening doors. The girls enjoyed a nice hike down and back up the mountain/ very big hill today. It felt great to stretch their legs and get some exercise. We worked all day on preparing for the teachers conference and preparing pictures for Mrs. Chamberlin's blog and cause on facebook. God has answering prayer and we are excited to be in His Service.
Posted by Who are we at 11:40 AM

I love the look on Sister Chamberlain's face in the picture of Dana with her curling iron. She's probably wondering what in the world she got herself into :) I am praying for & thinking about you often.

I'm glad things are flowing and you are seeing opportunities to witness and teach already on your trip. Stay encouraged and be safe. We love the updates and are praying for you all.