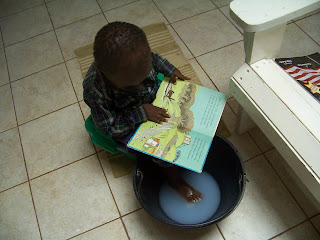 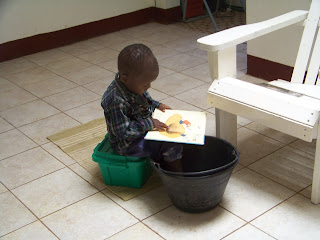 In Cameroon, though they speak English, they use different words for things that requires some learning. Instead of saying "did you hurt yourself" you would say, " do you have a wound or is it paining you." Well,, during our church on Sunday a rather naughty Caleb was required to sit between Uncle Drew and Auntie Dana. It was during this time that we saw his toe had been cut and was bulging and getting infected. I was happy to hear Drew say he was going to take care of it because I tend to have a weak stomach for things like that, however, Drew had to be in a mens meeting right after church so I took Caleb up stairs and had him start by soaking his foot in some antibacterial soapy water. After seeing that it didn't hurt too much he sat quietly and looked at a book. Auntie Agnes came in and said that the bulging flesh would need to be cut off but there was NO way I was going to do that, so we bandaged it up and waited for the nurse to come on Monday. I went in the nurses room at the school with them Monday and helped to hold him while the nurse fixed his toe, but I had a hard time. It made me think of how blessedly spoiled we are back home where a doctor would have given a shot to numb it before working on it. Not so here, she didn't even simply cut it but rather pinched and tore it off. After she had remove the piece she poured Amoxocillin from a capsule on it and bandaged it up.
You know, I used to want to be a nurse but I am not sure I could do it, it hurts me too much to see others hurt, but I know it is better to have some pain than a terrible infection. I will admit I prayed Lord please protect my family from infections and injuries here and little harder that night. As for Caleb, the little guy is doing better today and we are going to keep an eye on him to try to prevent further pain.
Posted by Who are we at 2:26 AM

Eeks! Glad the nurse could come take care of this for you. He looks so cute sitting there...I can't imagine that he was being naughty :)

I love reading all your updates! I am glad you all are adjusting and settling in. The picture of Kent and his buddy is so cute and I agree with Leah, the little guy with the sore toe looks too stinkin' cute to be naughty! Have a wonderful day!