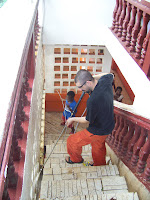 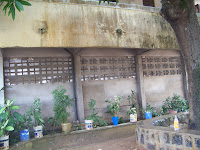 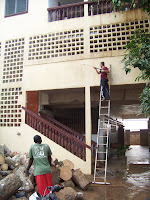 It has been decided that part of the orphanage building needs repainted to
prevent moisture damage but first it needed cleaned. Under the mango tree there was a lot of moss and mold growing so Dad Chamberlin suggested Drew power wash it. The ladder reached to the second floor and Drew did what he does well, playing monkey, and worked on stripping the mess away. 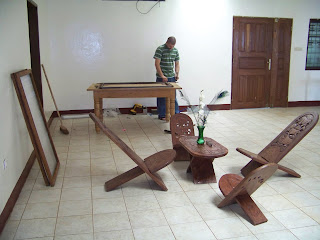 The screens in our bedroom windows needed replaced so Drew along with Liberman replaced 7 window screen. 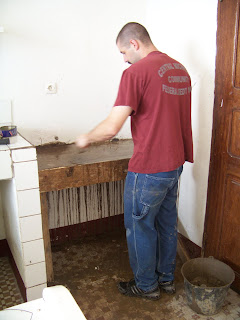 Brownie points on this job!
There was no good place in my kitchen for the stove to go so my wonderful husband built me a cement extension with rebar and cement. He lowered it quite a bit so his short wife could reach the pot. It was a messy job but it turned out very well and we are enjoying it.
This little guys name is Victory. He is one of the orphans here. He tried swinging sideways and bashed his head against a sharp edge causing an inch long cut that was quite deep. The nurse was gone so Drew had to fix him up. Before we get letters of concern or scolding let me explain the lack of medical gloves. Though we now have gloves at the time we had none so Drew was very careful as he shaved his head and bandaged it tight together. It has healed quite nicely and through it all this tough little guy never made a peep. 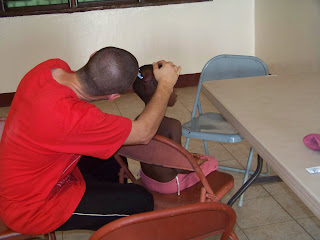 You're such a good EMT, Drew!