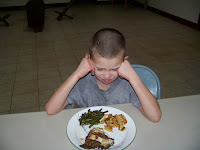 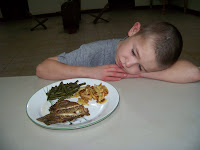 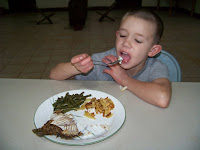 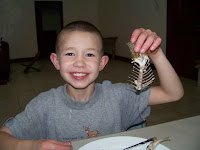 Kent slept through supper one night, it just happened to be our first fish dinner. We saved his a plate which included the tail of the fish. He was still a bit groggy when I placed his plate in front of him. The look on his face was comical disgust so I grabbed the camera and told him we needed to show his cousins, Connor and Derek, how to eat a fish tail. That perked him up a bit but he still had his doubts. He gingerly took his first bite. After that his whole attitude changed and he dig in. After licking the bones clean he began bringing the fish back to life by making it "swim" up, down, and all around. Dinner and entertainment, what a deal!
Posted by Who are we at 10:26 AM

That look on his face in the 1st picture...priceless!! :)

I have seen that first look before--on my husband! Go, Kent!